At first glance, re-creating the course followed by the Heemskerck and the Zeehaen should be straightforward; Tasman’s journal has an entry for every day, and that entry includes a coordinate comprising a latitude and a longitude.

The longitude given appears unlikely, but is actually just a different way of representing longitude. We are familiar with longitude coordinates in the range 180° to -180°, which we measure from the Meridian at Greenwich. Tasman however measured his longitude east from the peak of Tenerife Island, in the range 0 to 360.

Teide, the peak on Tenerife lies 16° 38′ to the west of Greenwich, so it is easy enough to adjust Tasman’s reported longitudes to derive coordinates that we can use in modern mapping systems. However, when we look at the course this yields, we get a disappointing result. The course lies nowhere near to coast of New Zealand.

This is because Tasman had no means of measuring longitude. His east-west movement each day was estimated by ‘dead reckoning’, and all errors were cumulative.

The latitudes and longitudes recorded in Tasman’s journal provide a very poor representation of the route sailed. It is possible however to reconstruct his course by using other details recorded in his journal. Below is an example.

At noon on 14 December Tasman’s journal recorded that he was in the latitude 42° 10′ S (the sun that day was “observed”) and also that he was “2 miles” off the coast. (Tasman measured distance in Dutch miles. 1 Dutch mile is 7.4km).

We can reliably reconstruct this position using his reported latitude, and that distance (14.8km) offshore.

While Tasman’s longitude was always estimated, the same is not true of his reported latitude.

As long as Tasman was able to see the midday sun, he could calculate his latitude remarkably well. How he did this is described in the post Tasman’s Navigation, Part 2

When Tasman could sight the noon sun’s altitude he provided us with half of his actual location… the latitude. In the course reconstruction, other details from the journal are used in conjunction with this, to derive his longitude. 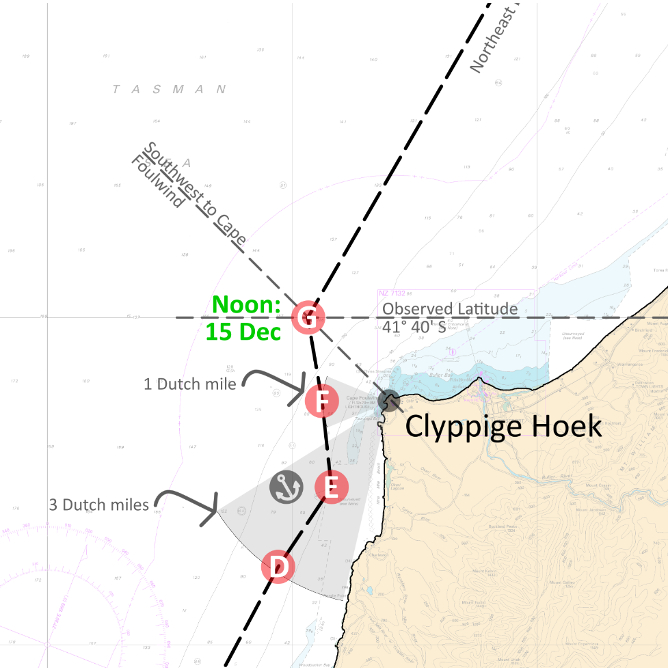 The noon location on 14 December is an example of this. He was known to be at a certain latitude, and also at a known distance from the shore. From these the full location, 42° 10′ S, 171° 8′ E can be derived.

It is not a completely precise reconstruction, this is not possible from the information available, but it is accurate within known bounds:

Testing with contemporary replicas of 17th century navigational instruments, shows that both the cross-staff and back-staff could reliably be used to measure the suns altitude (and thereby determine latitude) to within 2 arc minutes (1 arc minute being 1/60th of a degree). However, this was only achievable on days when the sun’s altitude could be measured.

Course bearings and bearings to features were recorded to the closest compass point. Tasman used a 32 point compass, which means that all bearings given have a confidence of +/- 5.6°. The 32 point compass is described in the post Tasman’s Navigation, Part 1

A Dutch mile has the contemporary equivalent of 7.4km (4.6 Imperial miles).

Distances to physical features were judged, not measured, and these can have a high variability. However, analysis of the distances on the occasions that they can be verified, indicates a margin of error of +/- 30%

There is some significant variability in these, but wayward distances can be removed by comparison of the start and end coordinates, and the reported distance sailed. Discrepancies exceeding 1 Standard Deviation were excluded from the reconstruction.

Distance ‘sailed’ was always rounded to the nearest whole Dutch mile and therefore has an additional variability of +/- half a Dutch mile.

Depths were recorded while at sea and at anchor. At anchor, depth was measured while they were stationary using a line with knots at fathom intervals. This was quite accurate, but took no account of the state of the tide. At sea, depth was measured on the move using a longer rope, with knots at 5 fathom intervals. This has a variability of at least +/- 5 fathoms.

Tasman had no clock, and measured the passage of time in 30 minute increments using sand glasses. The day was divided into 6 watches, with each watch lasting four hours, or 8 glasses.

Although Tasman only rarely recorded time as “o’clock”, the time of day can often be derived from watch information in the journal.

The reference “in the middle of the afternoon” for example, means half way through the afternoon watch, or 14:00.

Midday, or noon, was when the sun was at its highest at his current location. At this time they re-started turning the sand glass. But the ‘noon’ time changed as they moved east or west, and cannot be directly compared to the ‘time zone’ based standard we keep today.

If Tasman had carried a clock, then as he travelled up the New Zealand coast, the time on his clock would typically show nearly 1½ hours earlier than on ours.

By combining these component parts, it is possible to deduce or approximate Tasman’s noon position each day and at many additional locations.

These are used to prepare a detailed course reconstruction, which is presented in a series of charts in the following post.